SPD enforces Directive as COVID-19 cases are projected to reach 3,500 in April 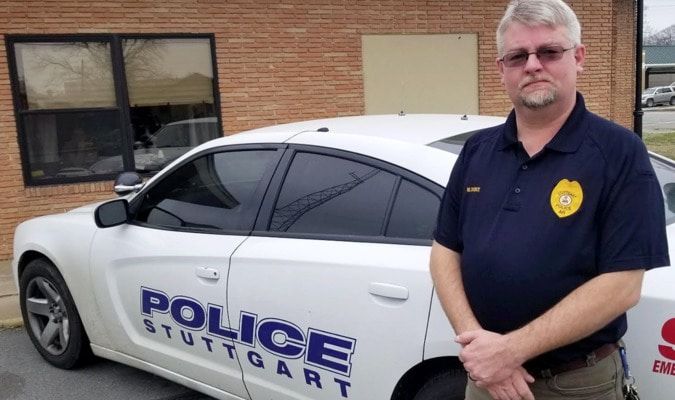 As COVID-19 cases continue to rise in Arkansas, Governor Asa Hutchinson has ordered Arkansans to limit gatherings to less than 10 people and to practice social distancing. Last Thursday, Hutchinson’s Directive was signed and put into law, which Stuttgart Police say they will enforce. During Hutchinson’s address to the public last week, he stressed the importance of social gatherings to 10 or less people and said he will be issuing a Directive in that matter.

“I’ve heard while many Arkansans are abiding by that very carefully, there are some exceptions to that and those exceptions can endanger what we are trying to do in getting a handle on this crisis,” said Hutchinson. Hutchinson added an enforcement component would be allowed with the Directive. “This is not a heavy handed part of the law,” said Hutchinson. “This just gives us the ability to say you all need to disperse, this is not consistent with the public health directives.”

Dr. Nate Smith, Arkansas Secretary of Health, adds there is a potential when in a public space, someone may be infected and may not even know that they are. “They may not have signs and symptoms,” said Smith. “At this point to assume that at any public place there is the potential for COVID-19 transmission, we need to take those personal precautions.” Smith said keeping a six-foot distance, washing your hands, avoiding contact with someone who is visibly ill and staying away from people if you have symptoms, will protect communities and slow down the spread of COVID-19.

“The Secretary of Health, in consultation with the Governor, has sole authority over all instances of quarantine, isolation, and restrictions on commerce and travel throughout Arkansas, as necessary and appropriate to control disease in the state of Arkansas as authorized by Ark. Code Ann. §20-7-109—110,” said Stuttgart Chief of Police Mark Duke in a release. “Based on available scientific evidence, it is necessary and appropriate to take further action to ensure that COVID-19 remains controlled and that residents and visitors in Arkansas remain safe.”

Arkansas State Police Director Colonel Bill Bryant said in Friday’s press conference that he had an outstanding conversation with law enforcement officials and prosecuting attorneys throughout the state who will protect and serve the citizens of Arkansas, making sure they are safe from the virus.

“Law enforcement as a whole, we’re going to do a reasonable approach to people who have violated this directive, try to seek voluntary compliance and hopefully we won’t have to use the enforcement component,” said Bryant. “If deemed necessary, we will. We try to avoid it. Just use common sense.”

The Directive Order states all public and private gatherings of any number of people occurring outside a single household or living units are subject to the following directives and exceptions:

• Due to the high risk of community spread of COVID-19, gatherings of more than ten (10) people in any confined indoor or outdoor space are prohibited until further notice. Gatherings subject to this directive include, without limitation, community, civic, public, leisure, commercial, or sporting events, concerts, conferences, conventions, fundraisers, parades, fairs, and festivals.

• This directive does not apply to gatherings of ten (10) or more people in unenclosed, outdoor spaces such as parks, trails, athletic fields and courts, parking lots, golf courses, and driving ranges where social distancing of at least six (6) feet can be easily achieved.

• This directive does not apply to businesses, manufacturers, construction companies, places of worship, the Arkansas General Assembly, municipal or county governing bodies, or the judiciary; however, these entities are advised to limit person-to-person contact and maintain appropriate social distancing of at least six (6) feet to prevent the spread of this virus.

• The Secretary of Health reserves the right to exercise his authority to prevent the spread of disease in this State if, in his judgment, any of the excluded entities are operating in a manner that is a risk to public health.

Duke also reminded the city of the citywide curfew for anyone under 18 years of age. “If a juvenile is out, they must be accompanied by a parent, sibling or guardian over the age of 21,” said Duke. “Anyone caught out during this time frame is subject to questioning and or given a citation or possible detention.”

Hutchison announced that the state of Arkansas could have 3,500 cases in two weeks’ time with 20% of those hospitalizations in Friday afternoon’s COVID-19 update press conference. Hutchinson said he “hopes for the best” but is “prepared for the worst” during his press conference. In preparation, he has placed an order for 500 ventilators. Right now the state currently has approximately 571. Hutchinson hopes the projected numbers of positive cases in Arkansas stay on the lower end of the spectrum, but is preparing the state for the worse. “If you have 3,500 in two weeks, that’s 700 cases that are hospitalized in our state. The peak could be anywhere from April 25 to June 1 on this modeling,” said Hutchinson. “If that modeling is correct then the trend line will continue to come up, the cases and hospitalizations will come up. My goal is to beat those numbers and that’s what we are trying to do as a state.”