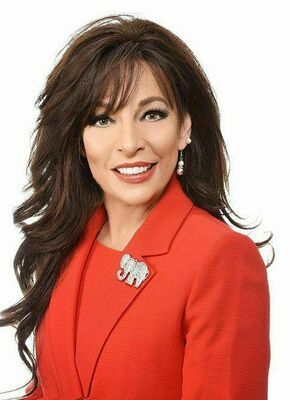 Disclaimer: Please acknowledge that the DeWitt Era-Enterprise's sole responsibility is to inform the public of unbiased current information as accurately as possible. We, in no way, endorse any political candidate and/or party, and ask that our readers do their due diligence in forming their own independent decisions regarding any upcoming elections. Thank you to our readers for choosing us to be your current source of local news for Arkansas County.

Jan Morgan is a National Conservative Commentator, appearing on Fox Business Network and other national TV, radio, and print media outlets. She is honored to serve as the National Spokesperson of Citizens for Trump, one of the largest grassroots organizations in America supporting Donald J. Trump and the America First agenda. For 27 years, Jan was an award-winning investigative TV journalist with a specialty in exposing waste, fraud, and abuse in government.

Jan's willingness to boldly engage with bad politicians at the State Capitol and fight for THE PEOPLE of her state has made her the go-to liaison between Arkansans and out-of-control career politicians.

When hundreds of thousands of Arkansan's jobs were on the line over a vaccine mandate, Jan Morgan LED THE FIGHT for medical freedom. Jan's position from the start was not for or against the vaccine but rather an individual's right to choose.

Jan Morgan is the only candidate in this race with a PROVEN RECORD of successfully outmaneuvering the Biden administration to help get laws passed to protect Arkansans from federal unconstitutional overreach.

She has done this in the areas of illegal immigration, election integrity, medical freedom, and gun rights.

Jan also got her own bill passed this last session for VETERANS, and her bill won unanimous support from both sides of the aisle.

Jan and her husband Bob own an Indoor Firearms Training Facility in Hot Springs, Arkansas. They have trained over forty-thousand law-abiding Americans in personal self-defense.

In addition, Jan has been a heavily sought-after national public speaker, appearing in 25 states and serving as keynote at Reagan and Lincoln Day Republican events across America.

Jan is a Constitutional Conservative. Her passion has always been The 2nd Amendment. After two decades of work on the 2A front, people across the country began referring to her as the 1st Lady of the 2nd Amendment.

Jan was one of only two women in America chosen to speak at the state capitol before the massive crowd for the Virginia Lobby Day rally when Democrats threatened to destroy the gun rights of citizens of Virginia.

She was also a speaker in New York before a crowd of over 9,000 people on the day legislators were voting to destroy the gun rights of New Yorkers with The Safe Act.

Her conservative voice has generated a following of over 1.5 million fans on social media which earned her the award, "The Voice of the Conservative Voter" by the Texas GOP, and "Conservative Rockstar" by Red, White, and Blue News.

Over the past 15 years, Jan has written articles for several conservative outlets, including Breitbart, Daily Caller, and Patriot Update.

Jan is the national founder of 2AWomen, the fastest growing national organization of women with chapters in every state, dedicated to grassroots-level efforts to confront and defeat any state-level attempt to restrict the gun rights of Americans.

She is also the national founder of a Ladies Only Shooting League called Hot Shotz, which provides women with the opportunity to gather with other women who want to continue to grow their firearms knowledge and tactical skills!

Jan served two terms on the executive board of the Arkansas State Baptist Convention and served as a senior staff member in charge of the tv broadcast ministry team at her local church. In addition, she was the executive producer of a nationally televised weekly program broadcast on the Trinity Broadcast Network.

Jan also served in Christian Broadcasting, producing a documentary about a Christian Television Station founded by her former Pastor and Governor, Mike Huckabee. The team won a national award for broadcast excellence for that documentary.

In addition, Jan taught Broadcast Journalism at Texas High School in Texarkana, TX, for seven years, where her students gained national notoriety for producing their own monthly half-hour tv program that aired on three TV networks! As a result, some of her high school students went on to pursue careers in broadcast journalism or television production.

Her now-retired parents raised Jan. Her mother was a school teacher with a double Masters's in English and Spanish. Her father was an inventory analyst at the TNN warehouse. Jan graduated from Daingerfield High School accepted a full scholarship to East Texas State University (now a branch of Texas A&M University) with a major in Broadcast Journalism and a minor in Political Science.

Jan is a Christian, wife, mother, and small business owner. She has one sister and an adult daughter. Jan enjoys riding her motorcycles through the Natural State with her husband in her spare time.

USACE waives day use fees at recreation areas i...

Archeological Investigations of the late-19th a...