ASPSF names Kendrick Jackson as Student of the Month 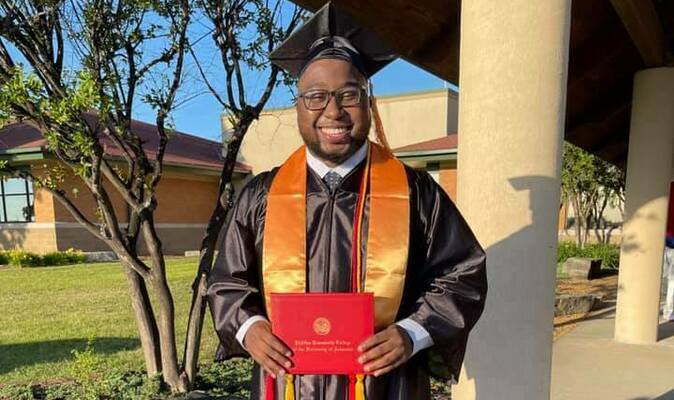 Stuttgart — Arkansas Single Parent Scholarship Fund is proud to recognize University of Arkansas at Pine Bluff student Kendrick Jackson of Stuttgart as the Student of the Month for August 2022.

A few years ago, this single father found himself sitting at home collecting disability checks to support his daughters, Keniya and Kimmorah. He had fainted at his factory job after having heart surgery and couldn’t return.

Kendrick’s coworkers had urged him for years to return to school, but no one in his family had gone to college — almost everyone he knew worked at a factory.

Then, Kendrick went to a friend’s birthday party: “I was sitting there, talking to his college friends, and I was holding a good conversation, but I felt so inadequate because everybody in this room had degrees. But I knew I could know as much as they knew.”

When he returned home, he applied to Phillips Community College in Stuttgart and started on his associate degree. Now, Kendrick has only two more semesters before he earns his bachelor’s degree in psychology from the University of Arkansas at Pine Bluff. His career goal is to become a counselor.

Kendrick said that his decision to get a postsecondary education has affected his family, too.

“My daughters and I have competitions over who has the highest GPA,” he said. “Now college is becoming a normal conversation in the house. Even with my cousins — now they’re talking about college. I’m trying to change the family norm: We don’t have to go work in a factory.”

Kendrick has been an Arkansas Single Parent Scholarship Fund recipient for several semesters and said the aid has helped him afford online textbooks, food during the at-home days of the pandemic, and gas to drive the 30-plus miles from his home in Stuttgart to Pine Bluff to attend classes.

“As far as the scholarship, it’s been good to me,” he said. “It’s helped me every semester. It really is a blessing.”

About Arkansas Single Parent Scholarship Fund: For 30 years, Arkansas Single Parent Scholarship Fund has worked to create stronger, more educated, and more self-sufficient families. Through scholarships and services, ASPSF opens doors for low-income single parents, helping them pursue education, secure employment, and transform the future for their families. With the help of volunteers and community support, ASPSF creates multigenerational change, transforming lives for both single parents and their children. For information about scholarships, volunteer opportunities, and ways to give, visit www.aspsf.org.

Local DHS Cheerleaders to Perform at the Varsit...