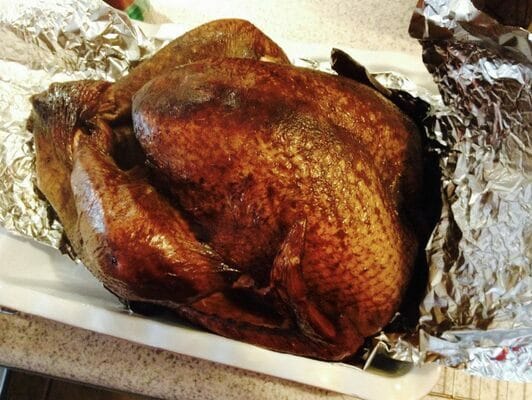 Center of Excellence for Poultry Science

U of A System Division of Agriculture

The traditional Thanksgiving meal revolves around the turkey, and food safety is a must to make sure holiday celebrations go off without a hitch.

BIRD’S THE WORD — On Thanksgiving, the day revolves around the turkey. Food safety should be a high priority.

Kristen Gibson, director of the Center for Food Safety, part of the Arkansas Agricultural Experiment Station, weighed in with some basic tips to keep the Thanksgiving feast safe. Her first piece of advice was to avoid washing the turkey.

“Once your turkey is thawed, most people want to get rid of the slimy feeling on the turkey by rinsing it in the sink,” Gibson said. “By doing that, you’re creating a really great situation for potential cross-contamination. Not only are you potentially spreading pathogens in your sink, but a lot of water can splash out that you don’t see.”

“You want to be sure your hands are properly cleaned before and after you touch the raw turkey,” Gibson said. “Wearing gloves may help further protect against potential cross-contamination, but you still need to wash your hands before putting gloves on.”

Be sure to change gloves and dispose of dirty pairs in between contact with the raw turkey.

Cooking by the numbers

Once the turkey is cooking, the most important thing to remember is temperature, Gibson said.

She said simply cutting the turkey open and eyeballing the meat to determine whether it is fully cooked isn’t a reliable method because looks can be deceiving.

After the meal has been eaten and cleanup commences, do not forget about the turkey.

“Don’t leave the turkey on the counter for several hours so people can pick on it throughout the day,” Gibson said. “Put it in the fridge so that it’s stored at the correct temperature.”

What is the Honor and Remember Flag?